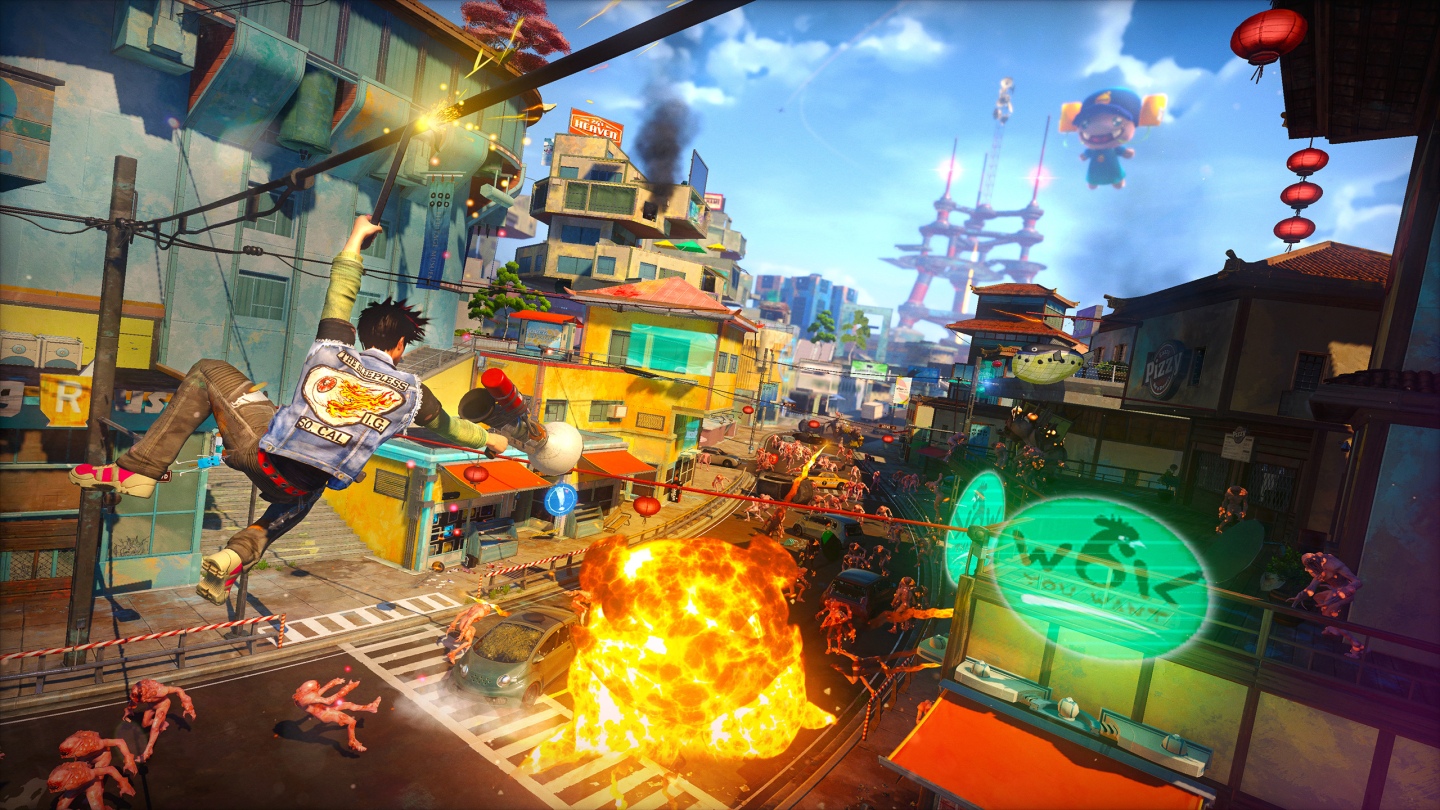 Like any creative industry, gaming is influenced by inspiration and iteration.  Trends establish themselves quickly.  It’s why Hollywood gave us two alien invasion films in 1996, two volcano films in 1997, two asteroid films in 1998, two green superheroes in 2011, and two Snow White films in 2012.  And it’s why E3 2012 became the year of the bow.  What gaming trends can we spot at E3 2014?

E3 2014 was full of trends, some new and refreshing, and some old and past their use-by date.

These are the new trends that emerged in E3 2014.  Personally, I mostly approve of these new trends.

We don’t want to lose the past

PC games enjoy a lot of advantages.  We most often hear PC gamers brag about having the best graphics (if they can afford it), but one of the lesser known advantages over console gamers is that, barring massive architectural changes that might happen once every fifteen or twenty years, you can play the same games today that you loved to bits a decade or more ago.  Services like Steam and GOG have made this easier than ever.

Console gamers are used to saying goodbye to a whole generation’s worth of games when a new console comes along.  Consoles typically don’t do backwards compatibility, or they don’t do it well.  Often the formats are different (custom cartridges, CDs, DVDs, Blu-Rays, downloads), and almost always the computing architecture is different (PowerPC, Cell, X86, etc.)

While the X86 architecture of the Xbox One and Sony Playstation 4 is hopefully setting the stage for a consistent architecture in future generations, which could open the door to straightforward backwards compatibility, we’re not there yet.  But what E3 2014 showed was console gamers’ appetite for continuity.  We’re not ready to let go of the best games of previous generations.

E3 2014 was chock full of remakes, re-releases and remasters.  Halo: Master Chief Collection packaged all four numbered Halo releases on one disc for Xbox One owners, bringing together games released on two prior Xbox consoles.  Grand Theft Auto V was re-announced in Sony’s press conference, and will be available with enhanced graphics for PS4, Xbox One and PC.  Naughty Dogs’ highly acclaimed The Last of Us, previously a PS3 exclusive, will be released later this year with remastered visuals for PS4.  The original Ratchet and Clank game will be remade for the PS4.  Watching the video feeds from the big four press conferences, it sounded like the biggest cheer of the show was reserved for the announcement of Tim Schafer’s Grim Fandango – a game that just reached its sweet sixteen – updated and re-released on PS4 and PS Vita.

Re-releasing classic titles for modern systems is the best option console gamers have right now to connect with great games from previous generations.  Proper backwards compatibility would be ideal, and maybe next generation we’ll finally have that, but for now E3 2014 started a new trend of holding on to the past and respecting our history.

We take co-op for granted

Gearbox’s loot-harvesting co-op shooter Borderlands and Valve’s four-people-fight-the-zombie-apocalypse Left 4 Dead have a lot to answer for.  They weren’t the first games to offer co-operative campaigns, let alone co-operative gameplay, but they helped popularize the idea.  They especially spread the idea of online co-op as opposed to old school couch co-op, with friends in the same room.

Ubisoft’s open world racer The Crew dangled the prospect of co-op racing where players join together to form “crews” (apparently Drive Club had already called dibs on “clubs”), and nobody seemed to care.  Forza Horizon 2 upped the ante by announcing co-op clubs of up to 1,000 players, but the audience only responded when they were told the game would render in 1080p.

Finally, Ubisoft took the idea of co-op gameplay, dressed it in a leather jacket, put it on a surf board and made it jump a shark with the announcement that motion-sensing mobile dancing game Just Dance Now would support simultaneous dances of up to 20,000 players.  The audience barely stirred from its snooze as it waited for Assassins Creed Unity to show up with its four-player co-op take on the French Revolution.

Co-op was so hot a few years ago, but apparently we’re all over it now.  It’s cool, but it’s expected.  You can’t expect to announce it in your E3 presentation and get a round of applause.

With the massive exception of Nintendo, the full spectrum of colour has been a long time in coming to the main stage at E3’s biggest press conferences.  For years, we’ve been treated to dour greys and browns in games that take themselves ever so seriously.  Because you can’t be “mature” and still use pink and orange.

E3 2014 showed that game makers have discovered the rainbow, and a beautiful thing it is too.  Probably the best-received game of Microsoft’s Xbox press conference was Insomniac’s over-the-top mutant-exploding open world game Sunset Overdrive.  The gameplay looked fast and fluid, with a lot of easy-looking environmental traversal, but that wasn’t so revolutionary (although their presentation did poke fun at relatively static cover-based shooters).  No, what had people smiling and cheering was the colour.  Bright, over-saturated reds, oranges, yellows, greens, blues, pinks and whites burst off the screen, with the player character, enemies and environment looking vibrant and fun.  I think we were all mostly surprised that the game in-action looked just like the CGI reveal trailer from last year’s E3.

The indie games on display showed their typical appreciation for colour, but perhaps the best came from Hello Games’ No Man’s Sky because it has all the trappings of a big budget AAA game and yet embraces colour regardless.  With seamless travel between undiscovered planets and the space between them, No Man’s Sky paints its universe with nebulae, mountains, forests, oceans, spaceships, laser fire, and even freaking dinosaurs, in every hue imaginable.  Actually, I’m pretty sure they showed me a few colours I’ve never seen before and don’t have names for.

These are the trends that are stubbornly sticking around even after years of dominating and distorting games of all genres.  Personally, I’m mostly tired of these old trends.

We still stick to cover

While Sunset Overdrive showed us that getting out from behind cover and shooting while on the run looks like a whole lot of fun, plenty of games respected the cover-hugging template laid down by Gears of War in 2006.

PS4 exclusive The Order: 1886 took a lot of flack at E3 for gameplay that looked, for all intents and purposes, to be about a thousand years old.  Slow moving protagonists stuck to cover, poking out to fire off a few rounds, before trudging on to another piece of cover and enduring half a dozen cutscenes along the way.

Some of the worst reactions were thrown at Ubisoft’s new Clancy property The Division, which was so hot last year after a fantastic surprise reveal, but this year showed itself to play out like another cover-based shooter.  And this year, even the co-op gameplay couldn’t redeem it.

We still have to fight zombies

So. Many. Zombies.  Or zombie-like things.  The trend for zombie-bashing showed no sign of abating at E3 2014.  Dead Island 2, Dying Light, Sunset Overdrive, The Order: 1886, The Last of Us, Bloodborne, Let It Die, H1Z1, and probably loads more I didn’t see because my eyes had already atrophied from lack of stimulation.

I get it, zombies are easy because no-one’s going to care about killing them, but come on.  That’s just too many zombies.  The problem isn’t so much that they look the same, because the games have just about enough variation in their skins to keep them visually interesting (I particularly like Sunset Overdrive’s bright pink mutants).  The problem is that zombies and zombie-like enemies behave the same – always shambling or running mindlessly at the player for a close-range melee attack.

So long as our games are filled with zombies, we’ll be fighting enemies that behave the same and that’s not fun.

This one’s crashing headlong into the new trend for colour.  Some games are still determined to be grey to impress us with how dark and gritty they are.  I’m going to pick on The Order: 1886 again because it’s a prime offending example.  It’s just relentlessly grey, and I’m afraid that’s just dull.  Seriously, I’ve been to Whitechapel in London.  It has other colours.

But I’ve saved up most of my ire for the reveal of From Software’s Bloodborne.  I found out after the show that this game was picking up quite a lot of hype and positive comments, and I found that reaction inexplicable.  When I watched the trailer…  No, let me try that again.  When I peered into the gloom of the trailer, I saw only blackness so inky and thick that I had no idea what was going on.  Something dripping, something with teeth, something shambling, something with a rusty blade…I guess.  At least The Order: 1886 had turned up the gamma setting.

Lots of trends at E3 2014.  I enjoyed the new trends in colour and continuity, and I understand how co-op has become passé.  I lamented the persistence of cover, zombies and greyness.

What did you notice at E3 this year?