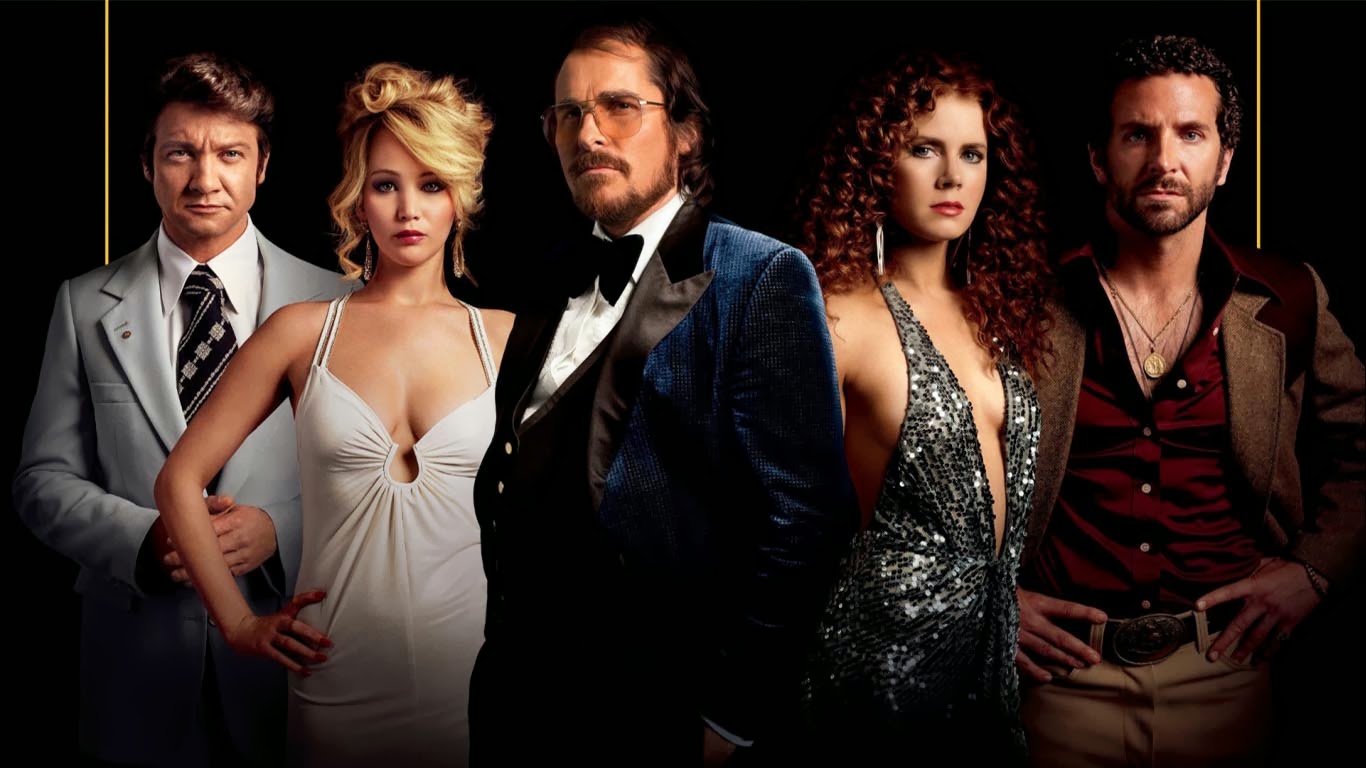 American Hustle, by David O. Russell, is a film about con artists.  It’s full of beautiful people with incredible hair throwing money about, having arguments and living the American dream.  It promises glamour, drama and heart.  But hang on, where’s the pay-off?  As it turns out, American Hustle’s greatest trick is to con its viewers into investing themselves in a film that’s never truly real.

American Hustle revolves around small-time conman with a comb-over Irving Rosenfeld (Christian Bale).  Rosenfeld latches on to the alluring Sydney Prosser (Amy Adams) who is half-convincing as a pretend Brit “with banking connections in London”, and the two of them walk financially desperate victims into a classic loan con (pay money upfront for access to a loan that’s too-good-to-be-true, no refunds).  Rosenfeld and Prosser are caught by FBI agent Richie DiMaso (Bradley Cooper) who forces them into his ambitious plan to entrap politicians taking bribes.  Rosenfeld and Prosser break free by conning DiMaso into believing he had the evidence he wanted.  All the while, Rosenfeld has to placate his unstable wife Rosalyn (Jennifer Lawrence) who seems to be running the longest con of them all.  It’s a con wrapped in a con, with a side of con.

But does the film layer on one con too many?  A good con film needs a solid foundation of truth, and characters with real heart, to keep the audience anchored to something that feels real throughout all the deceptions and plot twists.  Without that anchor, an audience can drown in all the lies.

There are plenty of great examples of con films in the history of cinema.  In Catch Me If You Can, conman Frank Abagnale (Leonardo DiCaprio) is tracked relentlessly by honest FBI agent Carl Hanratty (Tom Hanks).  In The Sting, the bedrock of friendship between Johnny (Robert Redford) and Henry (Paul Newman) sees us through the pretend spat between them.  In Six Degrees of Separation, suave student Paul (Will Smith) is quickly exposed as a petty criminal with a troubled background while in a neat twist his high society victims are revealed to be increasingly insubstantial.

In film, a good con is highlighted by contrast with truth.  We in the audience need that truth to see the con and appreciate it.

American Hustle does not have that truth.  It is all fizz and fizzle and flim-flam.  Rosenfeld, Prosser, DiMaso, even Rosalyn, are all con artists, putting on a front and convincing others to invest in something that isn’t real.  As the layers are peeled back, we are never allowed to be sure that we have reached the core, that what we see is “the real them”.  Tellingly, Prosser tells DiMaso that she wants them to be real with each other before they have sex; they never have sex.  There is no contrast between truth and lies in American Hustle, there is only the con.

American Hustle promises glamour, drama, and heart.  It’s a captivating promise.  We come for the glamour, we stay for the drama, but we want to leave with heart.  What do we actually get?  Without any sense of reality in the characters, we can never get the heart that was promised.  The glamour and drama got us through the door, got us to put our money down, but there was no pay-off.  We’ve all been conned.

I would be tempted to write off American Hustle as a failure if it weren’t for the meta-significance of a con film conning its audience into watching a film that doesn’t really exist, and the technical skill with which director David O. Russell has executed a classic con.

In an article on Psychology Today called How to Run a Con, author Paul J Zak writes:

The key to a con is not that you trust the conman, but that he shows he trusts you. Conmen ply their trade by appearing fragile or needing help, by seeming vulnerable. Because of oxytocin and its effect on other parts of the brain, we feel good when we help others…

American Hustle takes huge advantage of the oxytocin in our brains by toying with our charity towards people who appear vulnerable.  The film opens with a scene showing Rosenfeld’s painstaking routine for putting together his elaborate toupée / comb-over construction to cover his large bald patch.  Prosser clings on to her fake British persona to escape her mundane existence and troubled past.  DiMaso is shown struggling at home with his interfering family and fiancée.  Rosalyn is too incompetent to be left in charge of a sun lamp.

We get to see a bunch of people hopelessly out of their depth in the world: they allow us to see them at what appear to their most intimate and vulnerable moments.  We feel like they trust us enough to show us their weaknesses.  And that’s what fools us into taking them all seriously and investing in the outcome.  Yet there is no pay-off for that investment since we come to realise we ultimately have no idea who these people really are.

Apparently everyone except sociopaths is susceptible to manipulation of their oxytocin levels.  We audiences, by and large, have been taken in by American Hustle.  It currently has a Rotten Tomatoes rating of 93%.  The con has been so successful that we shouldn’t feel too embarrassed about falling for it.

My only reservation is that I half suspect that the meta-con of American Hustle wasn’t deliberate and only a happy accident by a director who sincerely wanted to tell a good con story but fell short, and that the audience’s reaction to American Hustle has itself conned David O. Russell into thinking himself a better auteur than he is.