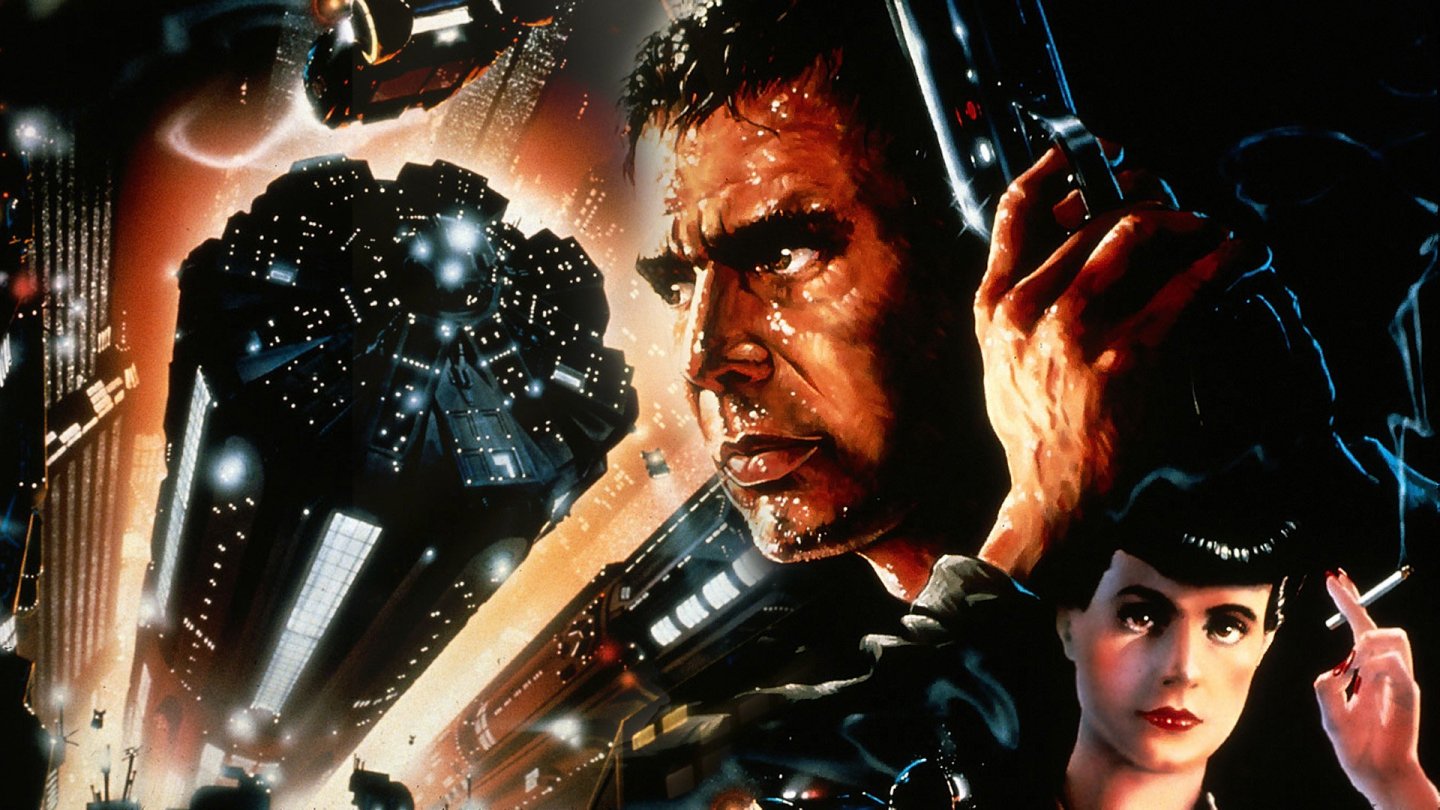 Blade Runner is many things.  It’s an action film about a tough guy hunting out-of-control robots.  It’s a neo-noir mystery in the tradition of Raymond Chandler and John Huston.  It’s the source of many internet debates over whether or not Deckard is himself a replicant.  But more significantly, Blade Runner is a challenging and brutally offensive exploration of religious philosophy in which God is dead and enlightenment is pointless.

I had the privilege of watching Blade Runner last week on the big screen at the Curzon Victoria cinema in London, in honor of the film’s 30th anniversary.  The version shown was the “Final Cut”, and I’ll be using that version as the basis for this article.

Three decades after its original release, Blade Runner has lost none of its beauty, melancholy, thrill or impact.  Aesthetically, it’s a perfect example of cinema straining against the limits of contemporary technology to evoke a powerful impression of a new world.

The score from Vangelis pulls us along a tightrope, dangling us over a chasm of something dangerous and unknowable

Some of the special effects, particularly as cars fly across the bleak cityscape, are easy to laugh at by today’s standards.  But in spite of that, it still looks and sounds like something that could be, or at least like something from a hazy dream.  Everything has enough wear and tear to look lived-in, and the sodden industrial-urban sprawl remains a remarkable and frightening vision.  The gold-and-black color scheme lends a wonderful ethereal quality to every scene.  Meanwhile, the score from Vangelis pulls us along a tightrope, dangling us over a chasm of something dangerous and unknowable.

The action/mystery plot that drives the film is still compelling, after multiple viewings.  In a future where genetically engineered slaves called “replicants” threaten to gain emotional awareness and rebel, special agents called “blade runners” are tasked with hunting and killing any that escape from the off-world colonies (where they do their labour) to Earth (where they are outlawed).  Deckard, a former blade runner, is brought back for one last job: to track four escaped replicants led by Roy Batty, an example of the latest and most powerful model of replicant.  Beginning his investigation at the Tyrell corporation that designed the replicants, Deckard meets Rachael, an experimental replicant with implanted human memories who at first doesn’t know that she is a replicant.  One by one, Deckard finds and kills the escaped replicants, culminating in a rain-soaked struggle atop a gothic skyscraper.  At the end, Deckard escapes the city with Rachael to see how long they will last before they too are hunted and killed.

In the traditional religious narrative, our finite lifespan is also a product of our creator – the God who cursed humanity with death for its rebellion and disobedience

With a cracking science fiction vision of the future and a thrilling plot, why bring religion and philosophy into this?  Well, all good science fiction has something to say about human nature, and it just so happens that Blade Runner is dripping with religious and philosophical metaphors.  That these metaphors say controversial things about our corporate and individual beliefs makes them worth unpacking.

In Blade Runner, God is dead

Blade Runner starts by confronting traditional, Abrahamic religion head-on.  Tyrell, the genius creator of the replicants, is presented as a kind of God figure.  The replicants, his creations (made in his image), take the place of human beings in a traditional religious narrative.  The replicants have been blessed with the capacity for strength, intellect and emotions; but they have a finite lifespan.  Because of their rebellions, replicants are designed to die four years after their “incept” date.

In this respect, replicants are just like people.  Nobody lives forever; death is inevitable.  And in the traditional religious narrative, our finite lifespan is also a product of our creator – the God who cursed humanity with death for its rebellion and disobedience.

Tyrell is an ineffectual, impotent caricature of God

In the film, the escaped replicants want to beat death.  They have gained emotional awareness, they fear death, and so they want to remove the limit on their lifespans.  In the same way, people struggle against the idea of death.  As Dylan Thomas wrote:

Do not go gentle into that good night,
Old age should burn and rave at close of day;
Rage, rage against the dying of the light.

The replicants scheme their way into meeting with their creator.  Roy Batty begs Tyrell to do something to undo his impending death.  And in the same way, traditional religion encourages us to go to God to find a way to eternal life.

But in Blade Runner, God cannot help.  Tyrell admits that he cannot do what Roy asks of him.  Despite this, Tyrell expects Roy to think fondly of him.

Tyrell: You were made as well as we could make you.
Roy: But not to last.
Tyrell: The light that burns twice as bright burns half as long. And you have burned so very very brightly, Roy. Look at you. You’re the prodigal son. You’re quite a prize!

Despite invoking the Christian parable of the prodigal son, who squandered his inheritance and eventually returned to his father seeking forgiveness, Tyrell is an ineffectual, impotent caricature of God.  Roy, angry with disappointment, takes Tyrell’s head in his hands and crushes it, until Tyrell is dead.

The allegorical nature of Roy’s relationship with Tyrell seems clear enough that it’s surprising there hasn’t been a bigger cultural recognition of this aspect of Blade Runner, particularly among Christians, for whom this caricature ought to be offensive.

In Blade Runner, enlightenment is pointless

Blade Runner goes on to confront the notion of enlightenment.  I’m not talking about the 18th Century movement towards rationalism, but rather spiritual enlightenment: the idea that we must attain some level of knowledge or wisdom to grow beyond ourselves.  In this way, Blade Runner does not discriminate in its attack on traditional religious principles – it takes on Western and Eastern religion equally.

For the replicants, enlightenment takes the form of emotional response.  The cop Bryant says this about replicants: “They were designed to copy human beings in every way except their emotions. The designers reckoned that after a few years they might develop their own emotional responses. You know, hate, love, fear, anger, envy.”  The replicants are sub-human, until they learn to develop emotions.  At this point, they gain a level of self-awareness.

Towards the end of the film, Roy says to Deckard: “Quite an experience to live in fear, isn’t it? That’s what it is to be a slave.”  In other words, it was Roy’s emotional development that gave him the self-awareness required to realize he was a slave.  Armed with this knowledge, Roy was able to break free, along with other replicants who had gained self-awareness.

This is a reflection of the spiritual principle of enlightenment, where self-awareness leads to freedom from this world.  But in Blade Runner, enlightenment is pointless.

All of the self-awareness and emotional development and material perfection of their design could not save the replicants from being killed by Deckard or succumbing to the limit on their lifespan.  The film does nothing to suggest that in death the replicants are free.  On the contrary, death is depicted as the final end, and no amount of knowledge and wisdom can do a damn thing about it.

In Blade Runner, existentialism is the only rational response

What do you do when you’re a replicant reaching the end of your lifespan, you’ve already killed God, and your self-awareness has done nothing for you?  If you’re Roy Batty, you become an existentialist.

In his closing scene, Roy comes to terms with his impending death.  In the face of an absurd existence, Roy chooses to be a slave to neither God, man, his genetic makeup or his own emotions; Roy uses the last of his living strength to choose to save Deckard, his adversary and perhaps also his kin.  He remembers the greatest moments of his life, and gives in to despair at the thought that those memories will be lost when he dies.  But, ironically in the words of his creator Tyrell, he “revels in his time”, for a few final moments.

So why is Deckard a replicant?

Maybe this is the only question you wanted answered, and the only reason you came to this article.  In that case, this section is dedicated especially to you.

There are lots of conventional reasons why Deckard is thought to be a replicant.

These are all good reasons to believe Deckard is supposed to be a replicant.  But I think there’s a more compelling reason: in the world of Blade Runner, everyone might as well be a replicant.

Why is Deckard a replicant?  Because in Blade Runner, every person we see is a barely-alive automaton, only ever on the cusp of developing normal emotions, never truly free.  The most human figure of all is cut by Roy Batty, fast fading, but reaching out a hand to save a man, and in the process quietly defining that he is who he is.