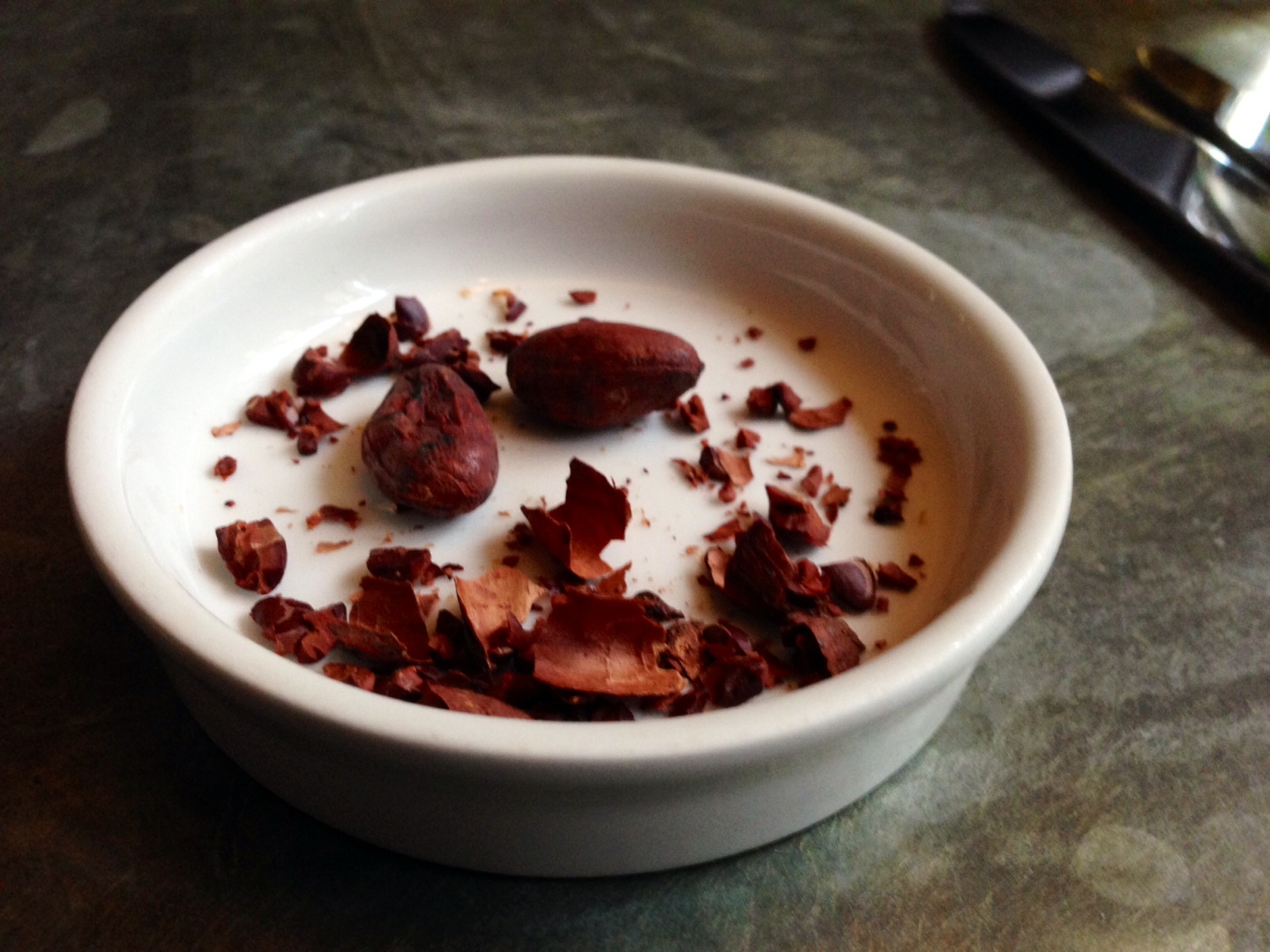 My wife and I adore chocolate.  For our recent wedding anniversary, I took her to Rabot 1745, a London restaurant affiliated with the popular high-street chocolate boutique Hotel Chocolat.  Rabot 1745’s gimmick is to include cocoa in every dish.  Was this chocolate heaven, or too much of a good thing?

Nestled in Borough Market, on the south bank next to London Bridge, the restaurant attempts a kind of rustic chic.  It’s all wood panelling finished so as to leave an intentional wonkiness to the surfaces.  There’s a rough, warm texture to the place, and the design supposedly recalls the feel of the Rabot cocoa plantation from which the restaurant gets its name, but it does give the impression of trying a bit too hard.

In place of some dry breadsticks or sticky olives, we were instead given cocoa beans to nibble while we waited for our drinks and food.  We knew what we were getting into by visiting a cocoa themed restaurant, but this was still an enjoyable little surprise.  Having broken the brittle husks, we found the cocoa nibs inside to be crunchy, savoury, and not overly bitter.

The cocktails are no exception when it comes to cocoa.  My wife’s Old Fashioned was infused with cocoa, and my own rum sour was sprinkled with crushed cocoa nibs.  Both were well made and presented.  The addition of cocoa didn’t necessarily enhance these drinks, but it certainly didn’t take anything away.

To start, my wife had pan seared tuna with gnocchi and cocoa nibs while I had a salmon terrine atop a slab of white chocolate horseradish.

The tuna was as good as any in a comparably priced restaurant, but the crunchy nibs layered on a satisfying new texture.  The salmon terrine would have been decent by itself, but the white chocolate horseradish was something else: I loved the combination, and the glazed mini horseradishes that flanked the dish were a welcome bonus.

The presentation of cocoa or chocolate flavours was less forward in the main course dishes, allowing the well cooked food to stand largely on its own.  The mash showed the strongest chocolate flavour, but it worked well and I would happily eat it again as a guilty pleasure.

We didn’t expect the minds behind Hotel Chocolat to hold back when it came to the dessert course and they didn’t disappoint.  Supremely chocolatey and reassuringly heavy, dessert at Rabot 1745 brings a meal to close with a bang, shortly followed by a sigh and a groan as you struggle to move afterwards.

We finished our evening with a dessert wine that promised us figgy flavours but ended up tasting more like raisins (which my wife hates).  Oh well, you can’t win everything.

Cocoa in everything is of course absurd

Rabot 1745 has shown good judgement in how it uses what is – let’s face it – a gimmick.  Cocoa in everything is of course absurd, there’s no way around that.  But it could so easily have led to a sickening dining experience.  They have put enough thought into figuring out which cocoa flavours and textures complement a fairly typical selection of good savoury dishes that eating in this ridiculous, fake plantation house is never less than good, cheeky fun.

Christmas reminds us all that, yes, it is possible to have too much chocolate.  But unlike those parents who, on Christmas morning, allow their sweet-toothed child to gorge hopelessly on sweets before breakfast only to deal with the sugar crash come lunchtime, Rabot 1745 demonstrates enough restraint in its menu to save chocolate gluttons like me from our worst excesses.

What’s left are the ingredients for a damn good evening out, with just enough of something extra to make your visit a memorable occasion.