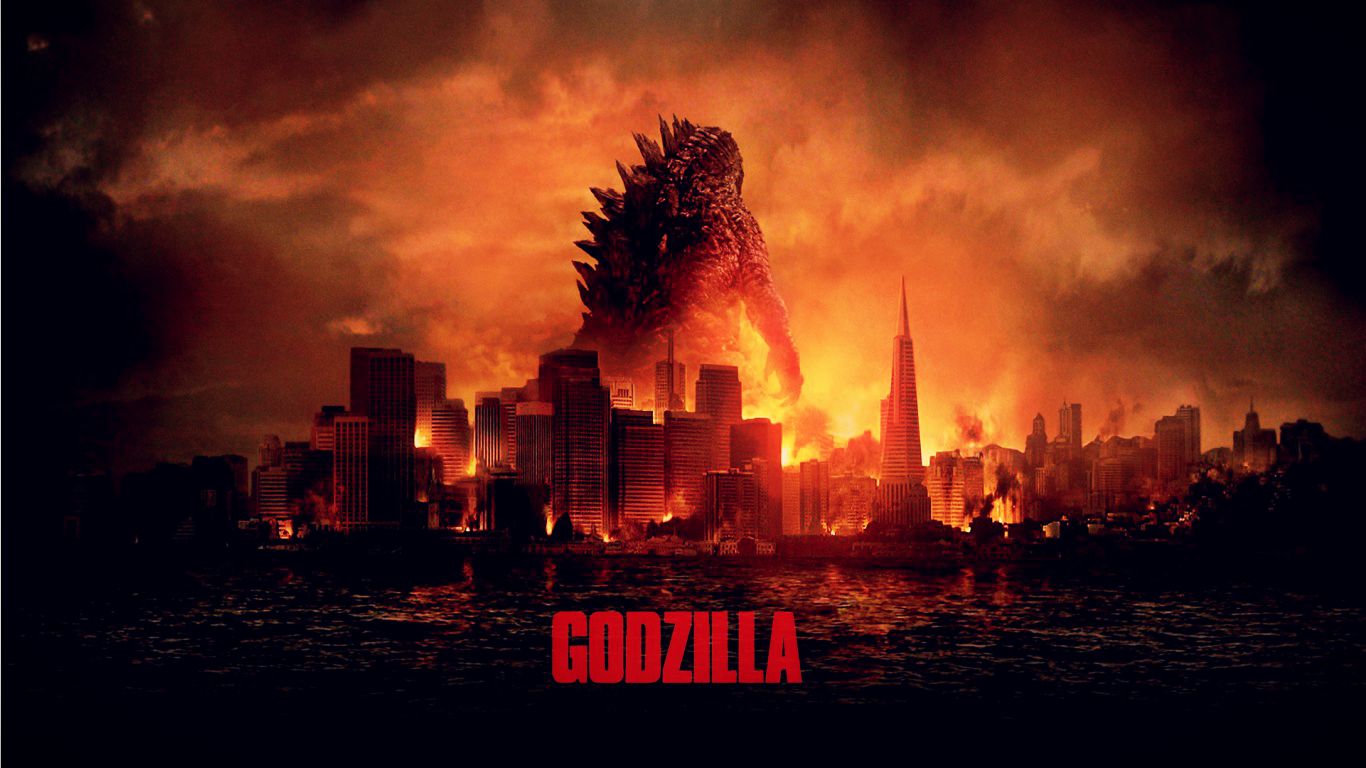 Godzilla, the monster star of this month’s biggest blockbuster, is the manifestation of nature’s wrath against mankind.  Having meddled with forces beyond their understanding, scientists in the film have brought a terrifying evil upon our world.  Godzilla appears to correct the situation: defeating our enemies, chastening mankind, and offering a merciful olive branch like an Old Testament visitation of God.

May those who curse days curse that day,
those who are ready to rouse Leviathan.
– Job 3:8

Godzilla is a spectacular film.  Emotionally gripping from beginning to end, paced dramatically, and sporting the best use of special effects I’ve seen, this is one summer blockbuster you don’t want to miss.  Director Gareth Edwards has the courage to limit your view of his creatures, keep the action personal, go small when lesser directors would go big, and use his generous CGI budget to support the drama rather than to replace it (and kudos to the editor, who shows an impressive sense of timing).  In other words, it’s the polar opposite of 2013’s Pacific Rim.

In Godzilla, we do not have a simple confrontation between mankind and nature

But the film’s subtext is worth returning to.  A superficial reading would show Godzilla to be another ecological disaster-parable, in the vein of The Day After Tomorrow, where mankind’s careless interference with nature has horrific consequences, with the lesson being that we must learn to respect the natural world more than we do.

Godzilla has more to it than that, though.  It’s not as straightforward as 1)mankind is a dick to nature, 2)mankind suffers the consequences, 3)mankind learns its lesson.  For in Godzilla, we do not have a simple confrontation between mankind and nature, but a three-way war between mankind, the terrors it awakens, and the correcting force of Godzilla himself.

In the film, the development of nuclear weapons and the proliferation of nuclear energy plants have attracted unknown creatures from the belly of the Earth to feed on the radiation.  Two such creatures, known as Massive Unidentified Terrestrial Organisms – or more conveniently as “MUTOs”, have lain dormant for years: one unhatched and one assumed dead following experimental vivisection.  Meddling scientists, under the banner of a shadowy international organisation, keep poking and prodding until the creatures come to life and leave a swathe of devastation across the north Pacific.

In his war on the MUTOs, Godzilla leaves San Francisco in ruins

The United States’ military forces are unable to repel the creatures as they advance towards each other to mate and reproduce.  Mankind appears to have met its reckoning for its nuclear ambitions and experiments on the creatures.

If any of you are struggling to follow at this point, I should make it clear that neither of these creatures is the famous Godzilla.  The titular monster appears only afterwards, not to attack mankind but to defeat the two MUTOs – the aberrant consequences of man’s sin.  In his war on the MUTOs, Godzilla leaves San Francisco in ruins.  The people who brought horrors on themselves are chastened, but they are disciplined by Godzilla and ultimately saved by him.

“Godzilla” may be an anglicised corruption of the Japanese Gojira, but it’s no accident that in one scene a character describes the monster as a “god”.  For Godzilla’s appearance is more religious in character than ecological.

In the Old Testament of the Bible, the people of God in the nation of Israel repeatedly sin against God.  Time after time, their rebellious ways bring disaster on their nation: war, defeat, exile and enslavement.  The people are chastened by the consequences of their sin.  When the people realise the errors of their ways, they plead for God to save them.  God raises up leaders like Nehemiah to defeat their enemies and lead the people home.  God’s chosen leaders discipline the people by teaching them the scriptures.  Chastened, then protected and disciplined, the people are shown God’s mercy as they are given a chance to begin again.

Godzilla stomps his way into the Bay Area like the Lord himself, to destroy the evil that man has unleashed, to protect them from their mistakes, and then to let them go when perhaps they do not deserve it.

Despite the Old Testament destruction on offer, the film ends on a tellingly New Testament note.  Having appeared to sacrifice himself in a last-ditch effort to defeat the MUTOs, Godzilla rises again and a few San Franciscans who see Godzilla for what he really is begin to celebrate him as their saviour.  The parallels with the New Testament’s description of Jesus Christ’s resurrection and the creation of the early church are undeniable.

The message of Godzilla is surprisingly different from the messages of other eco-parable films.  Where the others tend to show mankind as both sinner and saviour, Godzilla puts our salvation squarely on the shoulders of one big enough to bear it.

The religious undertones in Godzilla give depth to the film that it might otherwise have been without.  The human characters are largely simple (with the exception of Bryan Cranston’s obsessed nuclear engineer), so it’s a massive benefit to the film that Godzilla himself, and the message he represents, stand so monstrously tall.